Dear Evan Hansen 2021
Heidi Hansen
Film adaptation of the Tony and Grammy Award-winning musical about Evan Hansen, a high school senior with Social Anxiety disorder and his journey of self-discovery and acceptance following the suicide of a fellow classmate.
IMDb

The Woman in the Window 2021
Jane Russell
An agoraphobic woman living alone in New York begins spying on her new neighbors only to witness a disturbing act of violence.
Info IMDb

The Glorias 2020
Gloria Steinem
Feminist icon Gloria Steinem and her memoir, telling the story of her itinerant childhood's influence on her life as a writer, activist and organizer for women's rights.
Info Photos IMDb
Family Sites

For optimal viewing: This website is best viewed in a resolution of 1024 or higher, 32 bit color, and in Mozilla Firefox. Javascript, CSS and Tables.

This fansite is strictly against any paparazzi or stalkerazzi pictures. We will not support any kind of bashing or privacy intrusion into Julianne’s life and/or the one of people around her. We will also not post any gossip or rumors on private life matters.

Do things that scare you (like singing), walk away from angerÂ and binge-watch decorating shows. The Oscar-winning actress tells Elizabeth Day how she makes ageing glamorously look easyÂ
Julianne Moore, Hollywood superstar and legendary beauty, kicks off our conversation by telling me how she has spent the morning clearing up dog vomit. She and her husband, the film director Bart Freundlich, have two dogs â a ten-year-old chihuahua-mix called Milly and a labrador, Hope, whom they adopted as a puppy last November.

Usually, Julianne says, the dogs bark when they wake, but today they were suspiciously quiet. âFinally, I went to check on them and the little one had thrown up and pooped.â She shakes her head, as if she canât quite believe sheâs telling me all this. âSo I spent the whole morning taking out the dog crates, washing off the dog, cleaning up everywhere. Thatâs what itâs been like.â Itâs not exactly how you expect an interview with an A-lister to start, especially not one who has become a byword for a specific kind of glamour over her 36-year career. On screen, Julianne is a magnetic presence whether sheâs playing a 1970s pornstar in Paul Thomas Andersonâs Boogie Nights, a struggling Alzheimerâs patient in Still Alice â a part that won her a Best Actress Oscar in 2015 â or, in her latest role as Heidi Hansen, the mother of a socially anxious teenager in the film adaptation of the hit musical Dear Evan Hansen.

On the red carpet, she exudes classic style. She regularly tops lists of the worldâs most beautiful women and, at 60, claims to have had no work done. How does she feel about her looks? âI still struggle with all the freckles,â she admits. âI would give anything to not have them. But you know, this is what you have. And sometimes I think that about my hairâ¦ Iâm so closely identified with my red hair, it would feel weird not to have it, but then I wonder whether it might be so much easier to get dressed if I had dark or blonde hair, you know?â
It seems anathema to me that Julianne Moore,Â the most famous redhead since Anne of Green Gables, should say this, but itâs also revealing that even the most beautiful people have their own insecurities.

Today sheâs speaking to me from her beach home in Long Island, New York State, her famous hair tousled, her face make-up free, and itâs almost shocking how good she looks. By her own admission, sheâs grateful for her colouring: her fair skin means she has always kept out of the sun, and her lack of wrinkles and seemingly magical age-defying ways have led journalists to ask her what her secret is.
To be honest, she tells me, sheâs getting a bit sick of being the unofficial spokesperson for getting older. âItâs enough!â Julianne says. âLetâs all live, not talk about dying.â

Read the full interview/article in our press library.

Take a look in the gallery for over 3000 HD screencaptures of Julianne Moore from “Gloria Bell”.
Please be aware this movie contains scenes of nudity.

Julianne Moore visits Ellen to talk about Dear Evan Hansen and moving into a new neighborhood. 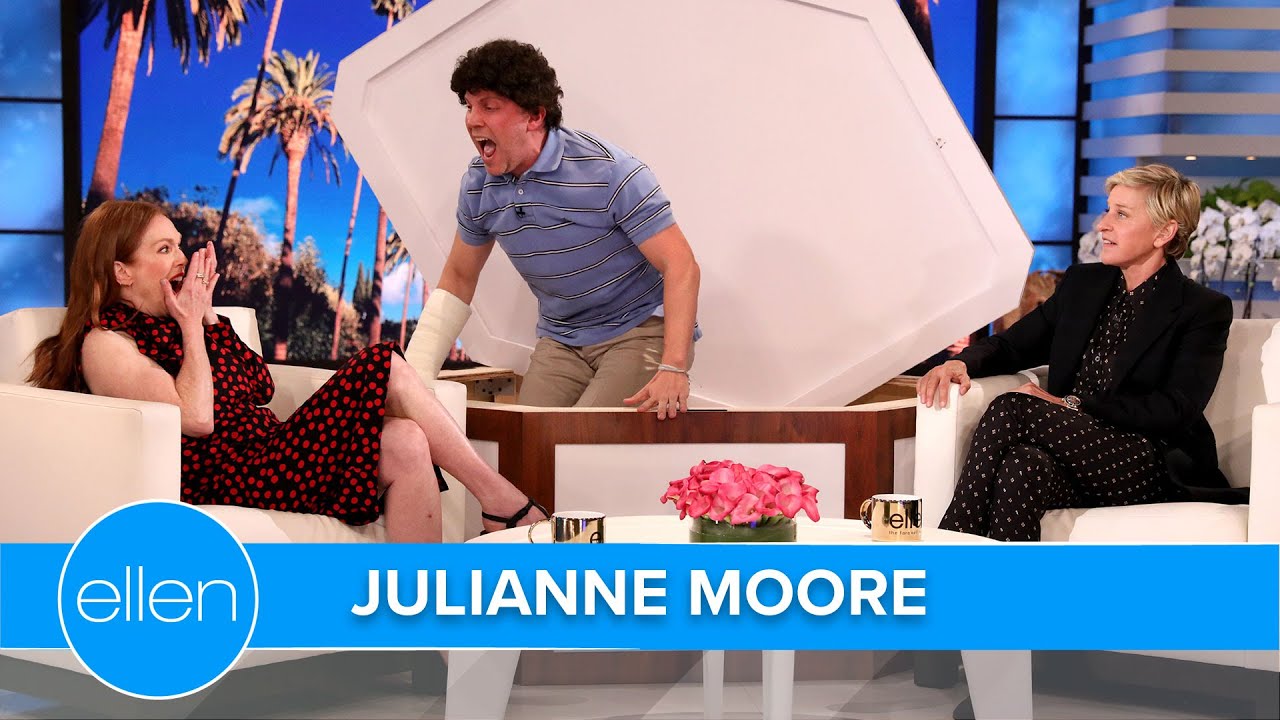 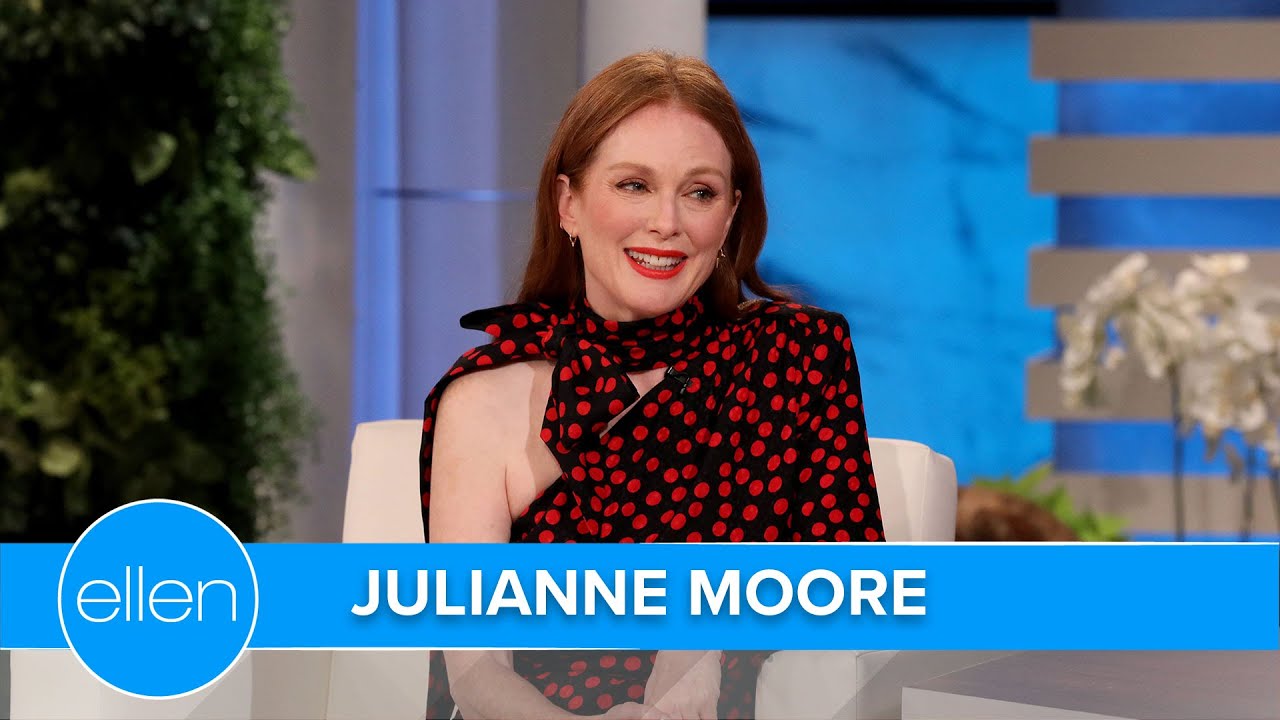 What a night it was. A wonderful night on the red carpet of “Dear Evan Hansen” for its Los Angeles premiere. Take a look in the gallery where I uploaded 83 photos of Julianne Moore from the event.

Julianne Moore talks about the pair of underwear Jimmy gave her for her Oscar, being in New York during the massive flooding from Hurricane Ida, her iPhoneâs crazy name, doing a Time Life commercial for paranormal books, going to a Knicks game and guys behind her spitting on Trae Young, sitting next to her friend 50 Cent, working with Ben Platt in the movie adaptation of Dear Evan Hansen, singing in the film, and auditioning for the role.